In our first 25th Anniversary post, we mewsed about the origins of our Civil War cats. Today, we would like to introduce you to a few of “our guys”!

For the first couple of years, “our guys” were allies in a fight against our other toys, enormous horses, tigers, and lions led by the big black Hound of the Baskervilles (from A. Conan Doyle’s Sherlock Holmes novel). We even wrote a trilogy chronicling their adventures. While the writing is probably atrocious, the stories are useful in reminding us of the names that we gave to some of our clay cats! 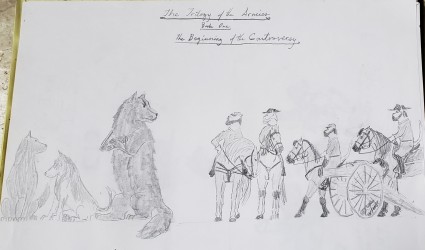 Quite a few of our cats have names. Most are cavalrycats, probably because they are more individual than infantry, which tend to be stuck together in batches of ten (to make counting them easier). Since cavalrycats are paired up, if one cat gets a name, his partner often does too. 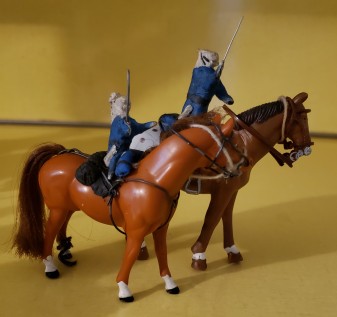 The most memorable Union cat for us is the little cavalrycat Bangs. True to his name, he does in fact have bangs, making him recognizable. His big brother is Harry, recognizable by his big Appaloosa horse and the scar on his face. Since both cats have always had the same horses, and since both are store-bought standing horses, neither cat is in “Come On, You Wolverines!” They have been retired and are waiting to be in a special display of our cats’ history.

The most memorable Confederate cats are another set of brothers. The first one made was a skinny cat. For some reason, the “in” phrase for kids back when we made him was “no offense.” Well, somehow, while joking around while making him, his name became Noah Fence. Later on, when we made another skinny Reb cat, he was clearly Noah’s little brother. What is his name? Ray L. Fence, of course! Noah is in “Come On, You Wolverines.” He’s hard to find, but a white belt buckle confirms who he is. Ray, meanwhile, has been retired—although we can’t remember why he didn’t make the cut to join his brother on the diorama! He’s identifiable by his blue belt buckle.

Alongside Bangs, Harry, and Ray in retirement is Confederate cavalrycat Nate, riding his 3-legged Paso Fino. His partner is Josh, the color-bearer in “Come On, You Wolverines!” Josh still wears his Vandyke beard (which makes him look rather like a Scotty dog) and proudly grips his brand-new flag.

Another cat who is becoming well-known in the museum, although not by name, is Bucktooth. Probably eight times out of ten, his horse, Bucky, is the first store-bought horse found by visitors trying to identify the 20 store-bought horses on “Come On, You Wolverines!”