We are privileged to occupy one of the buildings used as an orphanage for Civil War soldiers’ children after the war. This is the story of the National Soldiers’ Orphans’ Homestead.

In 1862, Amos Humiston enlisted in the 154th New York Regiment.  A quiet, kind man, he left his family only after their town assured him that his wife and three children would be well looked-after while he was away.  By July of 1863, Amos was a sergeant and well-known in his company as a noble, generous, cheerful man who was always quick to do his duty.  But above all, he was devoted to his family and always thought of them. 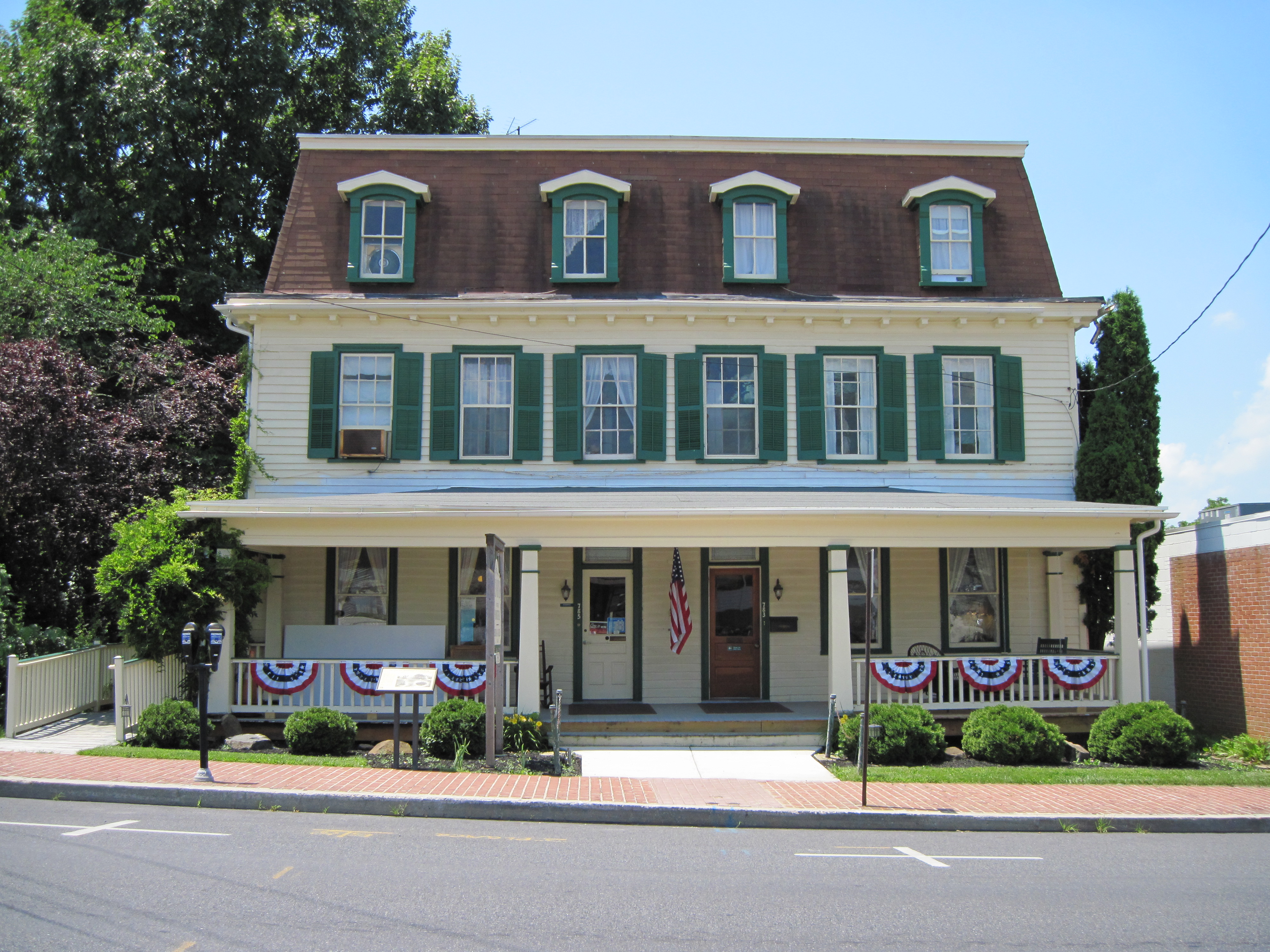 Civil War Tails at the Homestead Diorama Museum, formerly the girls’ dormitory for the orphanage.

On the 1st of July, 1863, the 154th New York covered the retreat of the Union XI Corps through Gettysburg.  The “Hardtacks” fought stubbornly, and by nightfall, only 15 of 224 men had made it to Cemetery Hill where the Union Army of the Potomac was reforming.  Among the dead was Sgt. Humiston.  He was shot above the heart and fell in a vacant lot on the corner of York and Stratton Streets.  After the battle, he was found sitting up against a pump, clutching a photo of his three children.  The small photo was the only identifying item on him.

In time, the photo came to Dr. J. Francis Bourns, a volunteer surgeon from Philadelphia.  Struck by the story of the nameless sergeant who had had only moments to pull out the photo of his children, Dr. Bourns began a search for the soldier’s family.  He had thousands of copies of the photo made and distributed throughout the North.  One article was published in a little paper called the American Presbyterian.  That paper had only one subscriber in the town of Portville, NY, but that person showed the article to Mrs. Philinda Humiston, and she recognized the photo immediately.

Copies of the photo were sold to raise support for the Humiston family, and their story raised interest in the plight of soldiers’ orphans in general.  However, it was not until after the war that plans for an orphanage could be seriously considered.  In 1866, a property on Baltimore Street in Gettysburg was bought with the intention of founding an orphanage.  The brick building had been used during the battle by Maj. Gen. Oliver O. Howard, the commanding general of the XI Corps.  This building still stands beside Civil War Tails.

And so it was that Philinda and her three children, Frank, Alice, and Fred, came to live in the building that had housed Amos’ commanding general, and that stood only a short walk from the sergeant’s grave in the National Cemetery.  Philinda became the first matron of the orphanage.

The formal opening of the National Soldiers’ Orphans’ Homestead was on November 20, 1866.  Primarily supported by Sabbath Schools and individuals, the Homestead provided a good home and a fine education for approximately 200 children over the next decade.  The orphans were included in many community events, especially in the Memorial Day procession to the National Cemetery.  Every year, they would carry bouquets in the procession, and lay them on the graves of the soldiers, some of whom were their own fathers, as in the case of the Humiston children.  This tradition is still carried on today by local children.

In 1869, this house was built as a dormitory for the girls, as there were now about 70 children living at the Homestead.  It was built at the back corner of the Homestead, so that the two buildings formed an L.  That October, Philinda remarried and moved to Massachusetts with the two younger children.  Frank remained behind to prepare for college.

Sometime in the early 1870’s, Dr. Bourns brought in Mrs. Rosa Carmichael as the new matron.  Nothing is known of her before or after being at the Homestead.  In 1873, rumors of neglect and abuse began to circulate.  In 1876, the townspeople’s suspicions were confirmed when the Memorial Day procession took place without the children.  Rosa had forbidden them to participate.  Although in 1876 Rosa was convicted on charges of cruelty and ordered out of town, for some reason she was still present the following year.  As more and more stories from children who had left the Homestead came out, pressure grew to close the orphanage.  By the end of December, all of the children had been removed and the Homestead was closed.

Unfortunately, the orphanage had not outlived the need for it.  Children were still waiting to come in.  The actions of one person—and the failure of others to do anything about them—had brought about the end of a good thing, proving that even well-founded, much-needed organizations with solid programs and noble visions can be destroyed if no one stands up to evil.

Over time, the Homestead buildings were sold and eventually the lot was divided.  In 1903, this building was made into a duplex and moved up to the street.  In 1915, it became the first B&B in Gettysburg.  It would change uses but remain in the same family over the next century, operating finally as lodging for tourists under Mrs. Mary Collins, who was devoted to preserving the history of the house as well as to making it a home for her guests.  In 2013, we purchased the building with a view towards starting a diorama museum.

Just as the Homestead itself represents the story of Sgt. Humiston – a soldier with a face, a name, and a life, who could have been lost to history as only a number on a tombstone – our dioramas seek to tell the stories of the men who fought in the war and bring them to life.  History is not merely dates and names, but the story of men and women who lived, just as we do today.

The Homestead is a testament to love and kindness – for the nameless, for the fatherless, for the stranger – but also to the consequences of unchecked evil.  As you visit us, let the stories you hear sink in.  Think them over.  We can all learn something from these stories, something that will inspire us to view our own lives and world in a new way, whether it is a greater love for one’s country, or a desire to show kindness to complete strangers, or a determination to stand up to abuse.  How will the men and women you meet inside these walls change you?