This Memorial Day, we decided to “mews” on the monuments here at Gettysburg, specifically those that were designed, raised, and dedicated by the veterans in honor of their comrades who fell during the battle.

While not every monument was dedicated by a unit’s veterans, most of them were, and as such they bear various features with special meaning: the shape of the corps badge, the equipment the men carried, or symbols like laurel for victory. Often, there is even more to a monument. Many locations were chosen because they held special meaning, such the place where a beloved colonel fell or a specific boulder that sheltered the wounded. Sometimes a statue or bas relief carving shows an individual whose acts of courage remained engraved in the veterans’ memories. While we will look at a few of the monuments’ stories today, you can find more in Gettysburg: Stories of Men and Monuments as Told By Battlefield Guides by Frederick W. Hawthorne.

Just past the edge of town along Chambersburg Pike (Rt. 30 W), the monument for the 149th Pennsylvania sits near the McPherson Farm. During the fighting on July 1, their color guard took the flags fifty yards away from the regiment in order to draw away the heavy artillery fire. The granite soldier on the monument gazes toward the spot where the color guard risked (and, for several of them, sacrificed) their lives to protect their comrades.

The 38th Pennsylvania’s monument stands on Warren Avenue, at the base of Little Round Top. The solemn bas relief of a soldier standing “By a Comrade’s Grave” honors all of the men of the regiment who fell during the war. It is a simple but sobering reminder to all of us of the cost of protecting our great nation and the freedoms and rights that we enjoy. 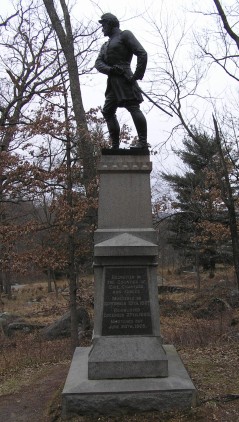 As Sykes Avenue begins to ascend Little Round Top, on the left stands the monument for the 83rd Pennsylvania. Forbidden by the Pennsylvania State Monuments Commission to include inscriptions regarding specific individuals, the 83rd topped their monument with “a Union officer.” However, the figure is clearly Col. Strong Vincent, their original commander and, at Gettysburg, their brigade commander. On the afternoon of July 2, Vincent was mortally wounded while trying to rally the 16th Michigan on the right of his brigade. More than twenty-five years later, the veterans of the 83rd could think of no one more deserving of a memorial than their beloved colonel whose blood stained the hill that day.

On the crest of Little Round Top, the veterans of the 140th New York raised their monument in honor of their fallen comrades. In particular, they unanimously chose to honor their commander, Col. Patrick O’Rorke, who was killed while leading the regiment into the fray on July 2. Not only does the monument bear a bas relief of his face, but it stands on the place where he fell.

One particularly interesting monument is that of the 5th New Hampshire on Ayres Avenue along the edge of the Wheatfield. It is quite memorable, formed by three large boulders supporting a massive slab on which another boulder sits. But even more striking is the choice of the veterans as they designed and located their monument. Commanding their brigade during the battle was Col. Edward Cross. While he was a fine officer who took good care of his men, his manner—including a highly critical personality and a strict sense of discipline—did not endear him to others, even prompting the officers of one regiment to view him as a tyrant. During the fighting near the Wheatfield on July 2, he fell mortally wounded. His last words were, “I think the boys will miss me. Say goodbye to all.” Mixed as feelings may have been of him on July 2, 1863, in 1886 the veterans of the 5th New Hampshire chose to honor him with their regimental monument. Not only is Col. Cross’ name included on the slab’s plaque, but the monument stands where he fell.

It is easy for us, a century later, to gloss over the thousands of monuments on the battlefield. But each one has a story, spoken in written words and symbols and often telling of those who paid the ultimate price for their country. To the veterans, the monuments did not mark the places where nameless soldiers stood and fought; they marked where comrades were killed or where a friend’s bravery was noticed by all—even the enemy. This Memorial Day, take a moment to ponder what the monuments of Gettysburg represent—maybe even take a drive around the battlefield if you can. We might not recognize a lot of the symbolism, but this can be a chance to reflect on the men who gave their lives for our country, no matter the decade or century.