The recent news that the Gettysburg reenactment would not be held in 2020 and the cancellation of this year’s “Liberation of New Oxford” WWII reenactment has us mewsing about reenactments today. Both issues appear to be temporary, so we look forward to future years for both events. However, the saying “You don’t miss something until it is gone” is very true. Today’s Mewsing is not to worry about the future of reenacting. Instead, I would like to ponder the impact that reenactments have had on us, the creators of Civil War Tails, over the years as we began and continued to study the Civil War and history in general.

I remember attending reenactments as spectators since we were kids. Even before our interest in the Civil War began, we went to a local Revolutionary War reenactment. Once we became Civil War buffs, we attended the Gettysburg and Cedar Creek (near Winchester, VA) reenactments every year. Taking us on these trips became Dad’s “thing.” Mom did the everyday homeschooling with us, so this was a win-win—Mom got a break, and we and Dad enjoyed some time together. I’ll always have fond memories of heading to Gettysburg in our green ’81 F-250, with the wind blowing the summer air through the open windows, since the truck didn’t have air conditioning. It’s funny which memories become special, but that’s what family time is all about, isn’t it?

Reenactments gave us a chance to see what we were learning about. Pickett’s Charge always meant watching Gen. Lewis Armistead lead the Confederates over the stone wall with his black hat on his sword. Sometimes, we could even pick out Lt. Alonzo Cushing commanding his battery despite receiving severe wounds during the bombardment hours earlier. The trick was to keep an eye on him because we were never quite sure when he would be shot the final time and fall into Sgt. Fuger’s arms. Sometimes, if I was really lucky, someone might even portray Gen. Richard “Dick” Garnett, one of my favorites, riding his horse Red Eye in the charge. 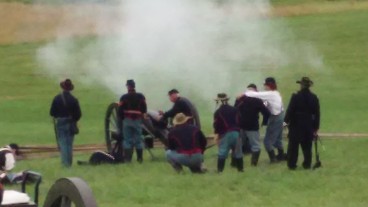 At Cedar Creek, seeing Gen. Stephen Dodson Ramseur was always exciting. He was not always portrayed, but one year we saw him fall mortally wounded while mounting his horse (his third). Of course, we always saw Gen. Phil Sheridan arrive, rally his routed troops, and then organize a counterattack that turned certain defeat into complete victory. It was always thrilling to hear the Union cheer and then watch the general ride along his lines—we knew Sheridan had arrived!

As we grew older, other aspects of the reenactments became valuable—and not only using the idea of digging a pit for our cookout fire the way the soldiers did. Who needs a charcoal grill when you can cook over a wood fire? (That is, in our opinion, the only way to grill chicken!)

In a more historian-oriented way, reenactments enabled us not only to see history but to hear it and smell it. For example, the sounds of different types of cannons vary. A Parrott or 3-inch Ordnance rifled gun has the usual boom that you might expect. But a Napoleon smoothbore has a characteristic “spang”. I read about this sound once, and then sure enough, at the next reenactment I heard that “spang”! Distant artillery sounds like “pum,” a different sound than close artillery, but no less threatening. Now, when reading about the two cannons that fired to signal the beginning of the massive bombardment before Pickett’s Charge, I can imagine just what that must have sounded like—two solitary, distant “pums” drifting up from the area of the Peach Orchard on a lazy summer day, just moments before the air split with over a hundred cannons opening fire!

But this is talking about Civil War artillery. Having grown up watching Civil War reenactments, it was interesting to go back to the local Revolutionary War event and realize how much more smoke is created by both artillery and flintlock muskets. In contrast, WWII guns are much louder and have no smoke. Not having studied either of those wars extensively, I found it interesting to compare the three generations of artillery.

Sights, sounds, smells—these are the things that help us when we read and write about history. Reenactments help us to smell the sulphur of gunpowder. We hear the “spang” of a Napoleon or the rattling wheels of a cannon and limber over rocks and rough ground. We see a Union battle line advancing, the soldiers’ uniforms blending into a solid wall save for the moving legs, giving the impression of steady dark blue over rippling sky blue.

Reenactments are limited in their size, scope, and portrayal, but that doesn’t matter. Books give us the information, and reenactments bring it to life. Perhaps the hobby of reenacting is shrinking, but hopefully, someone will always be there to help us see and hear and smell a glimpse of history. Then, years from now, others will think back to when they were kids on a road trip with their family, heading off to sweat and melt in the Gettysburg July heat and humidity—and loving every minute of it.