On the evening of April 9, 1865, Gen. Joshua Chamberlain received word that he would command the Union troops receiving the surrender of the Confederate Army of Northern Virginia. Gen. Grant had been generous in his terms to Gen. Lee, but he did feel and insist that the Confederates should lay down their arms before Union troops representing the Union army. Chamberlain, feeling “this was to be a crowning incident of history,” asked his corps commander, Gen. Griffin, if he could use his old Third Brigade, who he had served with for two years and commanded after Gettysburg. “I thought these veterans deserved this recognition,” he recalled in his reminiscences. Griffin obliged, transferring Chamberlain to command of the Third instead of the First Brigade.

On the morning of April 12—a chilly, gray day—Chamberlain’s men formed along the side of the road to await the Confederates. Chamberlain, still loathe to forget the other men he had commanded during the war, received permission to have the First and Second Brigades present as well, the former behind the Third, and the latter across the road, facing them.

From where they stood, they could see the Confederates breaking camp and then forming into column. “On they come,” Chamberlain recalled, “with the old swinging route step and swaying battle-flags.”

Chamberlain had given thought to the “momentous meaning” of this day, and had already issued orders that would mark it with a fitting honor. Like many of the Union troops, he couldn’t help but respect the thin, worn gray soldiers who approached. “Before us in proud humiliation stood the embodiment of manhood: men whom neither toils and sufferings, nor the fact of death, nor disaster, nor hopelessness could bend from their resolve.” 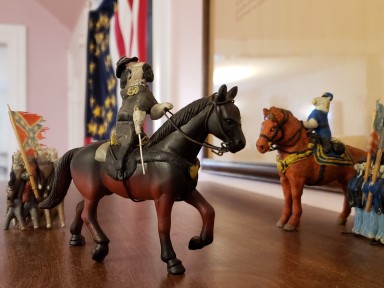 At the head of the first Confederate division, Gen. John B. Gordon rode, Chamberlain recalled, “with heavy spirit and downcast face.” Suddenly, a bugle rang out and the whole Union line “from right to left, regiment by regiment in succession,” shifted their rifles from “order arms” to “carry arms”—the soldier’s salute. Gordon “catches the sound of shifting arms, looks up, and, taking the meaning, wheels superbly, making with himself and his horse one uplifted figure, with profound salutation as he drops the point of his sword to the boot toe; then facing to his own command, gives word for his successive brigades to pass us with the same position of the manual,—honor answering honor.”

Few eyes were dry as the Confederates passed by, halted facing Chamberlain’s Third Brigade, and dressed their lines. They fixed bayonets and then stacked their rifles, and laid down their cartridge boxes and battle flags. All day long, division after division came. Many units carried bare flagpoles, having torn their flags into pieces, distributing them among the soldiers, or having buried the flags.

Gordon recalled the event in his Reminiscences: “as my men marched in front of them, the veterans in blue gave a soldierly salute to those vanquished heroes—a token of respect from Americans to Americans.” Chamberlain was also aware of the repaired unity of the nation: his men, he mused, were “men of near blood born, made nearer by blood shed. Those facing us—now, thank God! the same.”