Today is the anniversary of the final day of the battle of Gettysburg. In this Mewsing, we take the opportunity to spotlight a few of our cat-soldiers who portray specific officers and men on our Gettysburg dioramas.

If you have been to Civil War Tails Diorama Museum or browsed our website, you know that we have nearly 9,000 cats and some of them portray actual historical figures. We call the latter “identified” cats. What you might not realize, however, is that we have hundreds of identified figures. Even Rebecca, our Cat Census guru, doesn’t know how many (although writing this Mewsing has made her want to count them up and see!). On “The Fate of Gettysburg” alone, we have 57 specific officers and men. Some are familiar names, such as Generals Richard B. Garnett and Lewis A. Armistead, two of Gen. Pickett’s brigade commanders. Others are probably unknown to any but those who enjoy reading a lot about Pickett’s Charge, such as Pvt. Erasmus Williams and Cpl. Jordan Webb. Our Little Round Top diorama, “The Boys Are Still There,” will have over 50 identified officers and men as well, when it is finished.

Today we focus on four pairs. In each case, the regimental colors passed from one man to the other. Since color-bearers were prime targets, regiments tended to go through several in a fight—sometimes as many as a dozen color-bearers fell. But on our dioramas, it is not always the case that we have several of those men specifically portrayed.

One such pair is on “The Boys Are Still There.” As the 20th Maine Infantry fought to hold the left flank of Col. Vincent’s brigade secure on Little Round Top, Sgt. Andrew Tozier stolidly held the regiment’s national colors at the apex of the line. Amazingly, he was not hit, but the color guard around him—sergeants, corporals, and one private tasked with guarding the flag—was decimated. One of them, Cpl. Charlie Reed, was wounded in the wrist. He could have headed immediately to the aid station, but he chose to stay and continue doing his duty. Unable to use his rifle, however, he traded Tozier for the flag. Eventually, as he lost blood, he finally had to return the flag to Tozier and make his way to the rear to have his wound tended. Tozier settled the flagstaff in the crook of his elbow and continued firing Reed’s rifle. Col. Chamberlain and Maj. Spear both witnessed this. Chamberlain recommended Tozier for the Medal of Honor for his defense of the flag, and Spear noted that Tozier was calmly chewing on a piece of cartridge paper. When the regiment launched their famous bayonet charge, Sgt. Tozier advanced with them, still carrying the colors, unscathed. 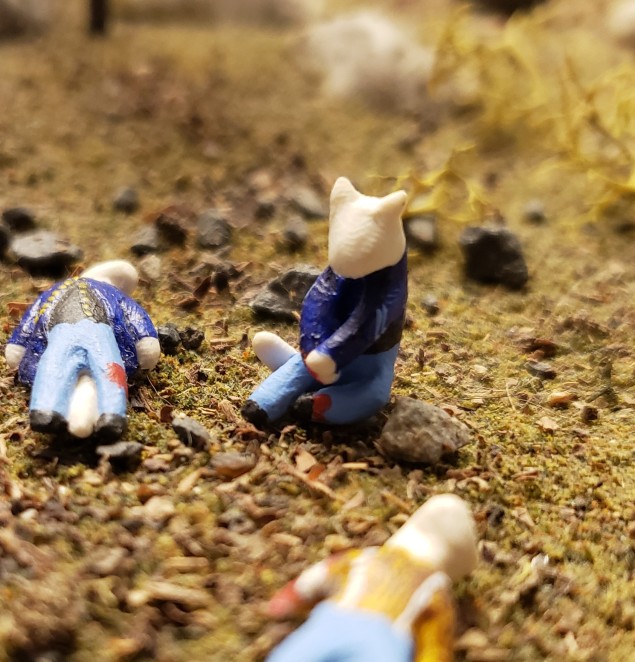 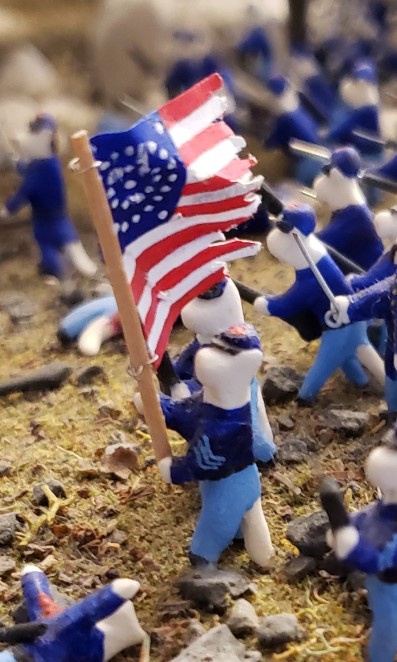 Our other pairs are found on “The Fate of Gettysburg.” As Gen. Garnett’s brigade neared the stone wall during Pickett’s Charge, the 28th Virginia Infantry lost several color-bearers in succession. Their colonel, Robert C. Allen, then took up the flag. Leading his regiment forward, he fell severely wounded near the stone wall. He passed the flag on to Lt. John A. J. Lee. The Union troops giving way, Allen’s Virginians took that section of wall. The wounded colonel asked a nearby man about the flag and then, probably having been told that it had successfully crossed the wall, he placed his hat on his head and died.

Meanwhile, Lt. Lee had indeed crossed the wall; he is said to have been the first of the division to do so. He jumped on the wall and waved the flag, and a bullet struck the staff. Later, as the Union counterattack surged forward, Lee fell wounded. A Union soldier demanded his surrender, but a fellow Confederate from his regiment bayoneted the soldier. Lee did end up being captured, and the flag was left resting against one of Lt. Cushing’s guns where it was captured by a soldier from the 1st Minnesota Infantry. 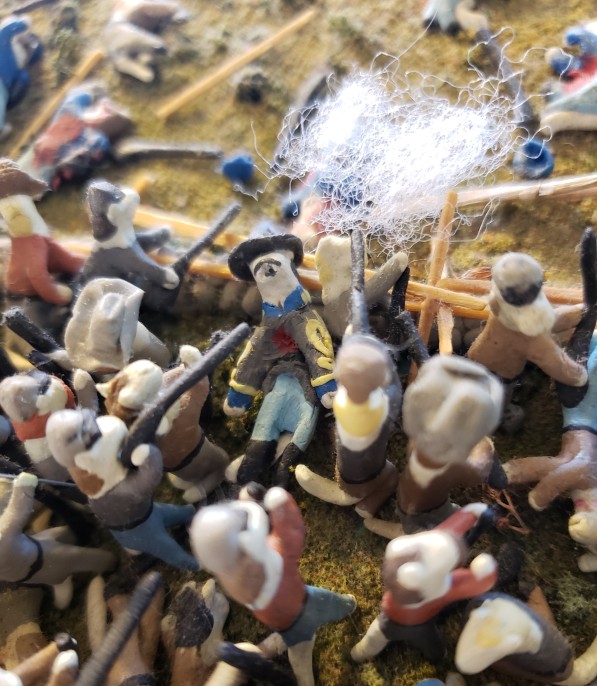 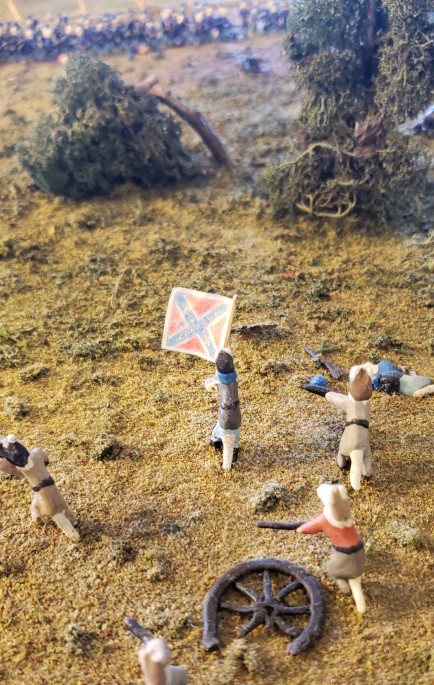 When Gen. Armistead’s brigade struck the Union line, Cpl. Robert Tyler Jones leaped onto the wall and waved the flag of the 53rd Virginia Infantry. He received a severe wound and fell forward over the wall. Lt. Hutchings Carter then took up the flag and continued on. Jones remained by the wall, holding a pistol and making sure none of his fellow Confederates were inclined to retreat. 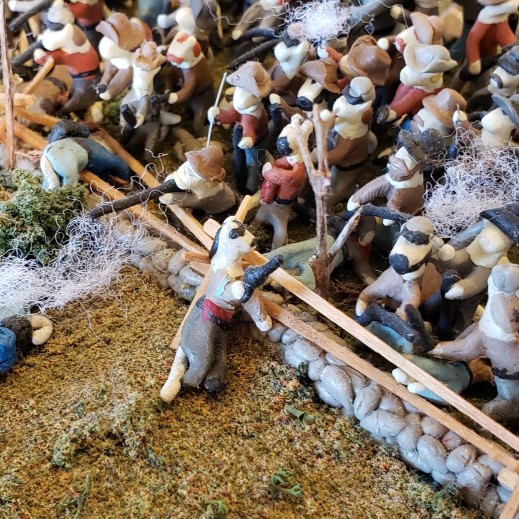 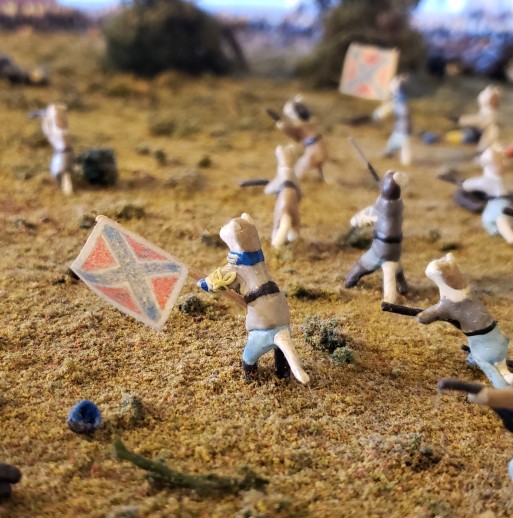 Lt. Hutchings Carter (53rd Virginia) (Lt. Lee of the 28th Virginia is carrying the flag in the background)

On the Union side, as regiments poured into the Copse of Trees to plug the gap and stop the Confederates, one of the units was the 1st Minnesota, sadly depleted from their gallant, desperate charge the day before. Carrying the flag was Cpl. John Dehn, the last of the color guard. During the moments that the fight hung in the balance as both sides pounded at each other, a bullet struck the flagstaff, splintering it in half and wounding Cpl. Dehn in the hand. Cpl. Henry O’Brien took the flag and sprang forward. The regiment followed him, starting a counterattack in the Copse. In the short, fierce melee that followed, O’Brien was wounded twice. He would survive, and like Sgt. Tozier, he received the Medal of Honor for his actions. 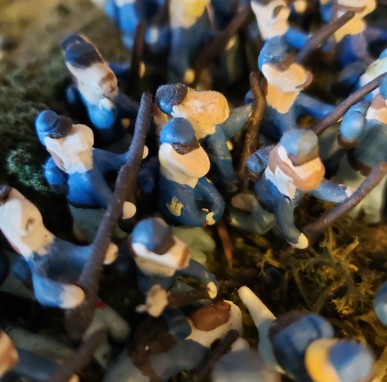 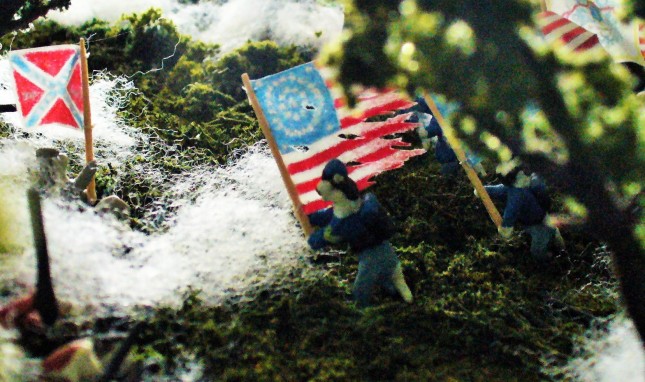