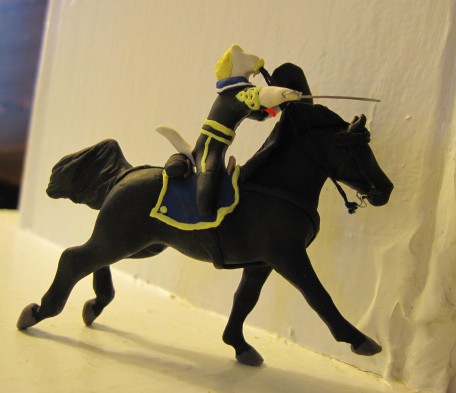 George Armstrong Custer.  We know him for the Little Big Horn, for his long yellow hair and fancy uniform, and for his flamboyant, devil-may-care actions.  But if you’re like me, that may be all you know.  So, as I research for our diorama of East Cavalry Field at Gettysburg, I’m reading Gregory J. W. Urwin’s Custer Victorious and taking the opportunity to learn what Custer was really like during his Civil War career.

Custer had only been commanding troops for about a week before the fight at East Cavalry Field on July 3, 1863.  He had spent the war so far as a staff officer, but he had shown his character, as he personally saw to the careful placement of videttes (cavalry pickets) and even led forays to take enemy positions.  He was fearless but had common sense, and that was why Gen. Alfred Pleasonton, commanding the Union cavalry, recommended him for promotion straight from captain to brigadier general.

Upon his promotion, Custer had a custom uniform made of black velvet with gold lace—a uniform that prompted one of Gen. Meade’s staff officers to call him “one of the funniest-looking beings you ever saw…a circus rider gone mad!”  But Custer was probably inspired by the flamboyant Gen. Phil Kearny, who had been killed the year before, and at heart, Custer was a romantic and still a boy in his twenties.

The Michigan Brigade didn’t think much of their new “popinjay” general—a boy coming in, promoted over heads, and dressed like a dandy.  For his part, Custer had to establish his authority as brigade commander, and he did it by bringing West Point discipline to his brigade of volunteers, rather than trying to be friends. This only made them dislike him more.

On July 2, near Gettysburg, Custer’s brigade encountered Confederate skirmishers.  Seeing it was only a couple hundred of the enemy, he strung his regiments across the road, then led Company A of the 6th Michigan forward in a charge—only to run smack into Gen. Wade Hampton’s entire brigade!  Custer was unhorsed, the company was cut to pieces, and they only barely managed to scramble back to their lines.  Custer himself would not have escaped had a trooper not pulled him up behind his saddle and high-tailed it to safety.  It was not a promising start as brigadier general.

Custer learned from the fiasco, and throughout the remainder of the war, he would be the one to send forward dismounted skirmishers to check out the situation so he would be informed before leading his men, personally, in a full-out cavalry charge.  Ironically, while pursuing Lee’s army after Gettysburg, it was Custer (who history calls rash) who was about to send dismounted men to check out a Confederate position, when Gen. Hugh Kilpatrick, the division commander, rode up and ordered the squadron to make a mounted saber charge instead—they did, and ran into a brigade of entrenched Confederate infantry.  Only the Confederates’ disbelief that it could really be an enemy attack with such a tiny force allowed them to make it to the trenches, and only Custer’s arrival with the rest of the brigade enabled any to survive the foolhardy attack.

On July 3, Custer’s first real test came.  After a day of fighting, the Confederates launched a massive cavalry charge—two brigades in columns of squadrons, thundering down on the weakened Union line.  Gen. David Gregg had only one regiment to send out against them: Custer’s 1st Michigan Cavalry.  As the regiment received their orders, one officer exclaimed, “Great heavens!  We will all be swallowed up!”  And then Custer rode up.  As brigade commander, he did not need to lead the charge, but he did, galloping far ahead of his men and shouting, “Come on, you Wolverines!”  The two charging columns struck with such force that horses were bowled over, end-for-end.  The little regiment stopped the Confederates in their tracks.  Thanks to Union canister and dismounted troopers peppering the flanks, the Confederate column finally broke and retreated, ending any chance that Gen. Jeb Stuart’s horsemen had of harassing the Union army’s rear.

From that moment on, the Wolverines no longer considered their general a “dandy” with “girl’s hair.”  A captain of the 6th Michigan wrote, “The command perfectly idolized Custer.” The entire brigade adopted the crimson neck

tie, to match their general.  One trooper wrote, “Our boy-general never says, ‘Go in, men!’  HE says, with that whoop and yell of his, ‘Come on, boys!’ and in we go, you bet.” And with affection like that in the ranks behind him, what could Custer not accomplish?  Even a quick survey of the remaining years of the war shows Custer’s men accomplishing the impossible, time and time again.

Take October 11, 1863 for example.  The Union cavalry was surrounded, and even Gen. Pleasonton was worried.  Custer’s solution?  Cut a way through the Confederates!  Taking two of his regiments, he scanned the enemy lines with his field glasses to find a weak spot, tossed aside his cap to reveal his yellow hair, and shouted to his men, “Boys of Michigan, there are some people between us and home; I’m going home, who else goes?  All we have to do is to open a way with our sabers.”  Three cheers answered him, the brigade band struck up “Yankee Doodle” (the brigade’s favorite tune, which they played for every charge), and off they went, following Custer’s yellow ringlets and personal guidon. They broke through, and the Union cavalry escaped the trap.

The following May, Gen. Phil Sheridan led his Cavalry Corps on a raid to Richmond, to draw out Jeb Stuart and whip him.  During the fighting at Yellow Tavern, just outside of Richmond, Custer’s men sat under fire from a Confederate battery.  After sitting under this for some time and receiving a close shave from a shell fragment, Lt. Asa Isham of the 7th Michigan began to grow demoralized and decided “the relations of myself and the battery should be changed in some manner.”  Moments later, Custer led the 1st Michigan out in front of the 7th and prepared to charge.  Seeing the beautiful sight of the newly-replenished 1st, one thousand strong, Lt. Isham “began to feel a contempt for the Rebel cannon…I sat straight up in my saddle and cheered in admiration of the 1st Michigan Cavalry, and in derision of the artillery.”  The band struck up “Yankee Doodle” and off they went with Custer.  It was not a hell-for-leather charge because of fences and a ditch in the way, but the 1st behaved coolly and calmly, and when they finally cleared the obstacles and charged, they took the cannons.

When Custer set his mind to something, he did it, and “surrender” was not in his vocabulary.  Even the prospect of being cut off in enemy territory while on a diversionary raid in February 1864 prompted him to say, “Well, then, I may have to do one of two things: either strike boldly across Lee’s rear and try to reach Kilpatrick, or else start with all the men I can keep together and try to join Sherman in the southwest.”  (He avoided the decision by not getting trapped in the first place, and made it back to safety after capturing 50-60 Confederates, one flag, and 500 horses, and destroying a bridge, three mills, six caissons, and other supplies.)

Custer infused his own enthusiasm and confidence into his men and, with a whoop and a holler, they would follow him anywhere.  Soldiers don’t follow a dandy; they follow a leader who cares for them and will give them success.  “Every man in his brigade worshipped him, and would follow him through anything,” a captain of the 6th Michigan recalled.  “They never went back on him nor he on the men.  We have been in some as tight places as troops ever were in, but he always got us out.”  He continued, “He always displayed a great deal of bravery, but I don’t think that you could call it rashness.  He never took his men in any place where they couldn’t get out.”

Gen. Sheridan called Custer “the ablest man in the Cavalry Corps.”  One of the young general’s officers wrote, “Custer was a fighting man, through and through, but wary and wily as brave.  There was in him an indescribable something…[that] nearly always impelled him to do the right thing.”  Colonel Alfred Nettleton of the 2nd Ohio wrote of their first engagement under Custer’s command in 1864, “Once under fire, we found that a master hand was at the helm, that beneath the golden curls and broad-brimmed hat was a cool brain and a level head.” 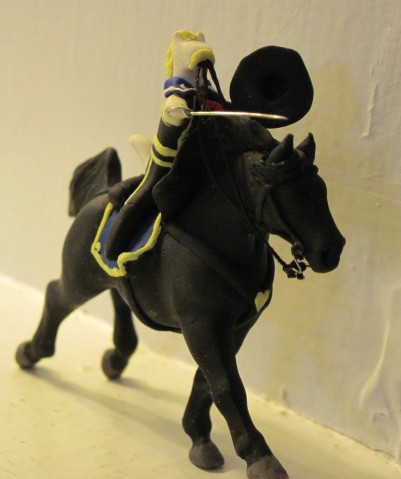 The Little Big Horn will always be a cloud over Custer’s memory, but perhaps the Little Big Horn should be tempered by another image of the man—the “grand and inspiring sight” of him on Sheridan’s Richmond Raid in May of 1864, so typical of the Custer of the Civil War: as four hundred Union prisoners approached the rail station and knew their hopes of rescue were dashed, they heard a shout, “The Yanks are coming!”  The guards scattered, and the prisoners, looking back, saw bursting from the trees a long line of blue cavalry at the full gallop, led by “the very picture of the dare devil fighter”: Custer, with his black velvet, red necktie, and gold lace.  As he flew past the Union prisoners, he brandished his sword with one hand and waved his hat to the prisoners with the other, his reins in his teeth!  One grateful rescued Yankee wrote, “I would like to have a picture of that gallant officer as he appeared on that occasion, and…I shall always remember him.”

One thought on “Foolhardy Daredevil or “the Best Cavalry General in the World”?”