Today we’re spotlighting one of our older mini-dioramas. On June 17, 1863, Union cavalry clashed with Jeb Stuart’s Confederates near Aldie, Virginia. Gen. Alfred Pleasonton’s troopers were trying to locate the Confederate army, and Gen. Stuart’s men formed a screen to mask the army’s movements northward into Pennsylvania. Over the next week, the two sides clashed several times, but the Union cavalry failed to break through and find the main army. 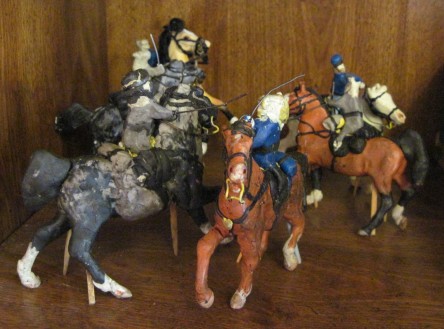 This mini-diorama focuses on an individual encounter during the fighting at Aldie. Gen. Hugh Kilpatrick’s brigade attacked the Confederate line piecemeal and was unable to dislodge them from their position on a ridge. Kilpatrick sent the 1st Massachusetts around the Confederate flank, but the regiment was ambushed and lost nearly half its men. During the fighting, Col. Thomas Rosser of the 5th Virginia slashed Maj. Henry Lee Higginson of the 1st Massachusetts on the right side of his face. Despite also being shot and left for dead, the major survived. He and Tom Rosser would meet again, but not on the battlefield—this time they met in peace after the war.