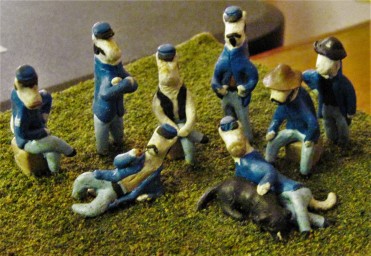 Civil War Tails is a museum of cats—almost 9,000 of them! But we do have one dog. He’s not a soldier; as Rebecca says, he’s a “dog-dog.” A little black mutt with maybe a bit of bull terrier in him, he’s the regimental mascot of a group of cat-soldiers who are having their photo taken. Many regiments had dogs as mascots, some of which were bull terriers (now known as pit bulls), including Jack, perhaps the most famous dog mascot, and Sallie, who can be seen on the 11th Pennsylvania Infantry monument here at Gettysburg.

Since his arrival, our little canine has enjoyed the prestige of being the only dog in the museum, but he never had a name! He represents all the dog mascots and officers’ pets of the war, rather than portraying a specific dog, and so the little fellow has remained a generic dog. Until now.

Yesterday, we welcomed “Loyalty of Dogs” to our museum, and in honor of the visit, we’ve named our only dog “Patrick” after a beloved pet who looked a bit like our little guy. It was great meeting the wonderful lady behind “Loyalty of Dogs,” and it’s an honor to name our cats’ mascot after one of her furry family members!

So, give your pup a bone and your kitty a treat, and help us celebrate our only dog finding his name! Welcome, Patrick!