School is starting up again, and chances are if you’re a student, you’ll have to make a diorama for a school project.  If you’re a parent, you’ll probably have to help with the diorama! As you’re planning it out, don’t forget to look around the house for humble but useful items, like paper clips, cardboard, or toothpicks.  Wait, toothpicks?

Of all the household items we use on our dioramas, toothpicks are probably nearest and dearest to our hearts. The other day we had quite a discussion about all the uses for (and types of) toothpicks. Don’t believe me?  Read on…

In our current repertoire, we have five basic types: 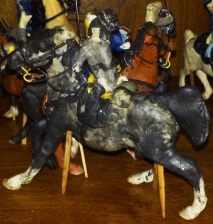 These were the first ones we collected as kids. They came in the big club sandwiches at our grandfather’s favorite restaurant (Larry’s II) and are perfect for supporting clay horses. Since they’re wide, they don’t slide up into the horse and break through the shoulder like a skinny, pointy one would. They’re also useful for large-scale cavalry flagstaffs.

Also great for large-scale flagstaffs, these are good for artillery sponge-staffs and rammers—or for lances, if you’re making knights!

Want to do a sailor on a ship’s deck? The square toothpick is just for you! Since their width and shape are uniform, they’re perfect for ships’ planks.

If you’re making the whole ship, using a thin corrugated cardboard (which has enough of a ribbed look to pass as planking) would be better, but toothpicks are the way to go for individual sailors, such as those we sell in display domes, or small areas like the inside of USS Monitor’s turret.

The leftover tips that get chopped off are good for the spikes that the Confederates put in Battery Wagner’s moat, which the 54th Massachusetts Regiment had to navigate through.

These toothpicks make great balusters (posts) on railings, such as these balcony railings on our scratch-built stern of Santisima Trinidad (look up the battle of Trafalgar in 1805). They also work well for the inside of USS Monitor’s lanterns, where the natural color of the wood implies a flame inside glass.

Saving the best for last! This toothpick is our workhorse. Fence rails, railroad ties, small-scale flagstaffs, picket fences, gun carriages, traverses and machicoulis galleries, even a ladder up a flagpole… The list goes on and on. Save the skinny ones for ¾” flagstaffs, the curved ones for rocking chairs, the blunt ended ones for fence rails… I’m pretty sure there’s nothing a flat toothpick can’t make—hence my buying a box of 2,500 of them (and then sorting them!). 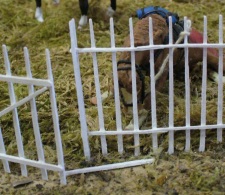 So there you go. The next time you need to make a diorama (or help your child make one), take another look at the humble toothpick. Although I should warn you—you might end up compulsively saving toothpicks from your sandwiches!

2 thoughts on “You Can Do It: The Humble, Versatile Toothpick”