In our past 25-Years Mewsings, we’ve discussed the progression of our dioramas. But today we take a look at a unique diorama. In its humble confines, “Come On, You Wolverines” represents the full history of Civil War cats.

Civil War cat cavalry was present long before we thought to make dioramas. In fact, if memory serves right, it was our becoming tired of having to “fix up” bridles and saddles after every battle that prompted us to set up stationary displays, instead of continuing to use our cat-soldiers as toys. Some of our early pre-diorama photos show the modest cavalries of our earliest cats—and yes, some of the horses in this photo are on “Come On, You Wolverines”!

Our oldest photo of a cavalry diorama is from January 2000, with the units’ horses color-coordinated. Incidentally, Capt. James H. Kidd recalls in his memoirs how the 6th Michigan Cavalry began with each company (troop) on matching horses. Troop A had bays, B had browns, and so forth. It didn’t last long!

Our cavalry “diorama” did not have a base, so it was always changing. In 2001, we began displaying our dioramas at the retirement community where we worked. This one-day event would continue annually until 2013, when we moved to Gettysburg. For the cavalry, this meant that we set the battle up, horse by horse, every time (plus a second time when we took them home that night!). During this time, the diorama generally represented Brandy Station (June 9, 1863). 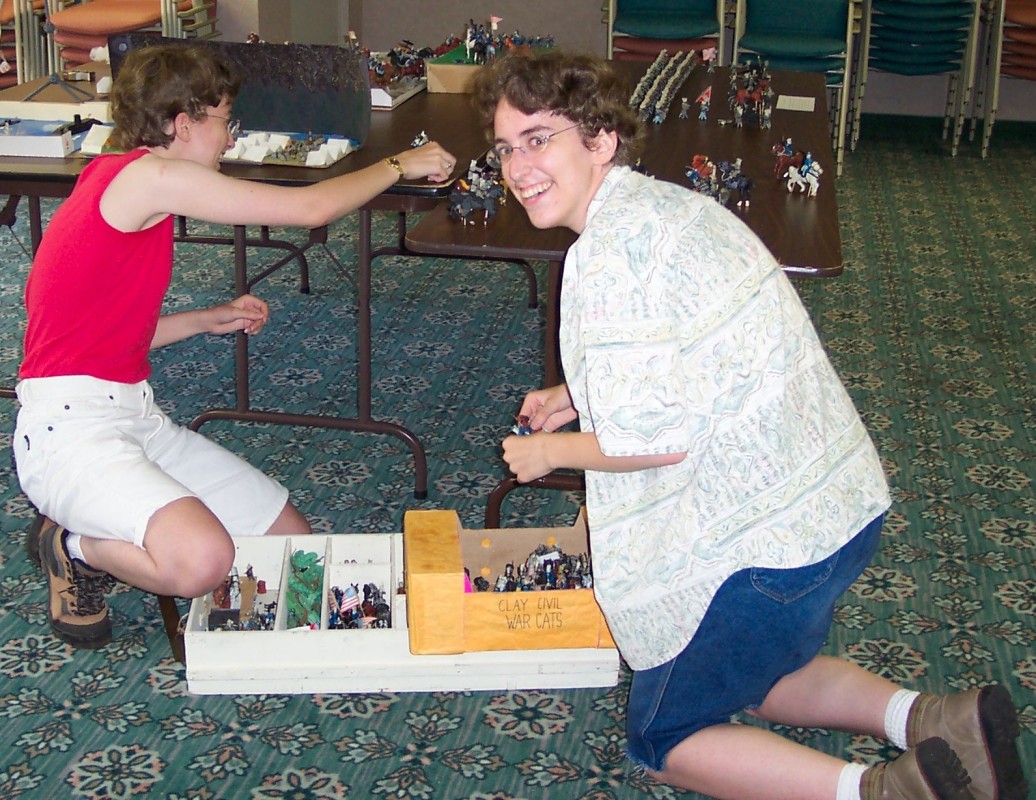 In 2009, the cavalry finally received a base! With real grass clippings as ground cover, the clashing horses now portrayed fighting at East Cavalry Field at Gettysburg (July 3, 1863). But transportation remained a bit hazardous, since there was no way to anchor the horses to their base. So, the cavalrycats jammed their ranks between the walls of their platform and did their best to keep their horses propped up on their feet. There are advantages to galloping stirrup-to-stirrup when you’re a toy horse bouncing in the back of a pickup truck!

Finally, in fall 2017, we began revamping the cavalry battle into an intentional portrayal of a specific point in time at East Cavalry Field. We decided to use the old base of a defunct diorama that had been sitting around for years. It was a match meant to be—it just took us a while to realize it! At last the old base had a use, and at last the cavalry had a base with a surface that they could attach to! The base has a very slight topographical slope, so Rebecca made sure to visit East Cavalry Field, pinpoint where she believes this clash of cavalry took place, and orient the base accordingly.

The revamp meant evaluating each horse and cat. Sleepy, lazy (standing) store-bought horses were retired to green pastures and removed from the census of Civil War Cat horses. Some old clay cats and horses had lost so many limbs (and/or head) that they were “put down.” If the horse’s clay was still soft enough, we made a new horse. Unfortunately for the cats, there’s just no way to resurrect old dried-out blue and gray clay! Clay cats and horses who remained more-or-less intact were cleaned up by scraping a couple decades-worth of dust off their faces, uniforms, and white markings. In the meantime, the two cavalries enlisted young whippersnapper Sculpey cats. Some supplied their own fresh mounts, while others inherited veteran cavalry horses.

Finally, it was time to install the horses. On May 5, 2018, the first horse, a Union liver chestnut, was wired onto the base! Over three hundred horses would follow before the diorama was finally placed on display at Civil War Tails almost a year later, on Friday, May 3, 2019. 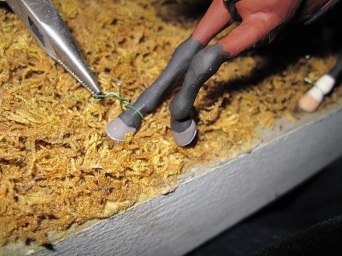 Of the 313 horses on the diorama, only twenty are store-bought. (When you come to Civil War Tails, try to find and point out the store-bought horses—Ruth and Rebecca can tell you if you’re right!) Thirty-five clay horses remain; some of them are new, some are “middle-aged,” and some are original and date back to the late ‘90s! The remaining 258 horses are Sculpey, and 204 of them were made for this revamp. The cats share the same mix of old clay and new Sculpey, making this diorama unique. No other diorama has such a mix of generations of cats and horses. When you look at “Come On, You Wolverines,” you can see a microcosm of 25 years of Civil War cat history!

(Kidd, J. H. Riding With Custer: Recollections of a Cavalryman in the Civil War. Lincoln and London: U of Nebraska Press, 1997.)