Today we continue our mewsings about the past 25 years of Civil War cats! But first, we would like to send out a big “Thank You” to everyone who joined us last weekend for our 5th Anniversary Scavenger Hunt. We had a great time and trust that you did too!

So far, we’ve mewsed about our progression from individual cats to our first topographical diorama. Up until designing the Angle, we had been searching for a good way to form the overall diorama—what to use as the base. After construction of the Angle, the emphasis shifted to the features on the dioramas.

As we made the Angle, with its little green bushes on green paint, we realized that we needed a better material for portraying grass. But what to use? So began our search for a good moss or anything else that could be used as ground cover. We found one type of moss that worked well as long grass for our 2.5” cats, and used it on “At All Hazards” in 2002.

Unfortunately, we discovered on another diorama that 1” clay cats could not handle the long strands of the moss. Their legs were too short to touch the base underneath the grass, and the soft modeling clay of their bodies could not survive the insertion of pins or wires to fasten them down. So, we abandoned that diorama. The cats were reused on the Angle, and the base was stored away. In 2018, it found its purpose when it became the base for our majorly revamped cavalry battle—“Come On, You Wolverines!”

In 2008, we discovered “turf” and used it for ground cover on Devil’s Den (“Give Them Shell”). By then, we had also discovered Sculpey for making our cats, so the result was perfect: ¾” tall cats had no problem gluing down onto the turf!

“Give Them Shell” was also the first venture into hand-sculpting rocks based off of photographs of the actual boulders on the battlefield. The clay we used was quite messy—note the cheese puffs laid out on Reb’s laptop for hands-free snacking! In 2013, when making Little Round Top, we switched to DAS Air-Hardening Modeling Clay which is easy to use when shaping and painting the rocks. 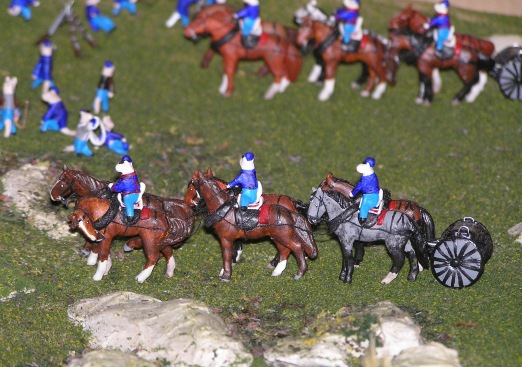 “At All Hazards” was probably the first diorama where we used Sculpey, a polymer clay that can be baked, to make some of the horses. The cats, however, were still the non-hardening modeling clay.

In 2004, we made USS Housatonic. Not only is the ship notable in that Rebecca had never made a tall ship before, not even from a kit, but this scene was the first time that we used Sculpey for our cats. Needless to say, after gluing the cats to the spars and having them not fall off, we were hooked on Sculpey cats! Life got even better in 2013 when we discovered Sculpey III comes in the various colors needed for horses and Union and Confederate uniforms, which meant we no longer had to paint our figures.

“The Boys Are Still There” is the culmination of our discoveries over the previous decade, using turf for the grass, DAS for the rocks, and Sculpey III for cats, artillery, and horses. But as always, we still look around the house for materials to use for other features. So, we use toothpicks for gun carriages, make our own trees with twigs from the backyard (buying Reindeer Moss for the leaves), and use black tea for the fallen leaf debris on the ground. 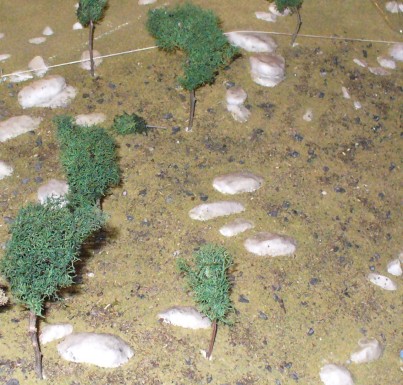 We’re constantly analyzing materials we see or objects we find and thinking, “Hey, that would be good for such-and-such” or “Would that work as this?” That’s just what happens when dioramas get in your blood. Research can give you ideas of what to use, but it is also fun to experiment and discover materials on your own!