In our 25th Anniversary Mewsings so far, we have told the story of our cats’ origin, introduced some old friends, and discussed the transition of “our guys” from everyday toys to dioramas. Today, we are mewsing about a major step forward in our diorama-making, signaling a new era in the lives of our Civil War cats.

We had had a Pickett’s Charge diorama since early on, which Rebecca constantly tweaked. By 2000, it was growing—first from one platform base to two, and then to boxes around them. Then we began “shrinking” the cats. All of this was with a view to depict the entire Confederate line but also a desire to make the diorama to-scale.

On June 30, 2000, during a trip to Gettysburg, our dad suggested that we buy a set of topographical maps of the battlefield and he would help us build a topographical base for a new, to-scale diorama. At the time, the smallest cats we could make were 1-inch tall. So, given the floor space we had available, we were limited to making only the Angle itself and half of the Copse of Trees. 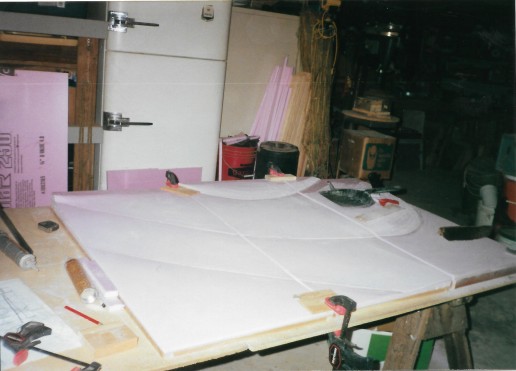 Sanding the topography of the base for “The Angle” is finished

“The Fate of Gettysburg” kept us busy through college. While other students were doing whatever college students do, we sat in the dorm room and made cats for the Angle! (Well, okay, we also made at least USS Housatonic and “Desperation at Skull Camp Bridge,” if not others.)

Since the Angle was the first major diorama we had made, we did not know about ground cover. So, the “grass” was green paint, with bits of green foam added as bushes to try to make the ground more 3-dimensional.

“The Fate of Gettysburg” would have to wait until 2012 for us to discover and install “turf.” During that major overhaul, we also realized that most of Pickett’s division would be on our diorama, along the stone wall. So we needed to add 1,000 or more Confederates. 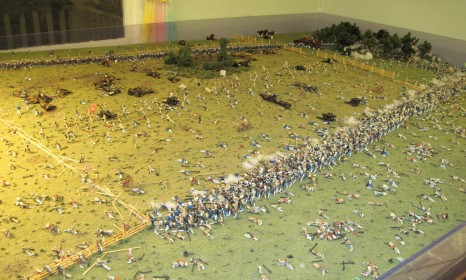 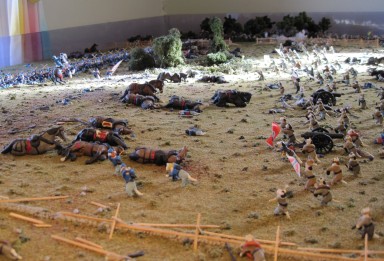 We also added injured and killed horses for Cushing’s battery. Since his guns were abandoned by the point in time portrayed on the diorama, we had initially overlooked the obvious fact that the debris of Cushing’s shattered battery would remain on the field after his men and limbers had withdrawn. This adjustment meant re-reading about July 2nd and earlier on July 3rd, to count up how many limbers and caissons had exploded. This was a reminder to us to keep in mind events or episodes that happened earlier at the location portrayed on a diorama. (See “CSS Virginia (Merrimack)—Day One” for another example of including “previous day” damage.)

“The Fate of Gettysburg” Then & Now: 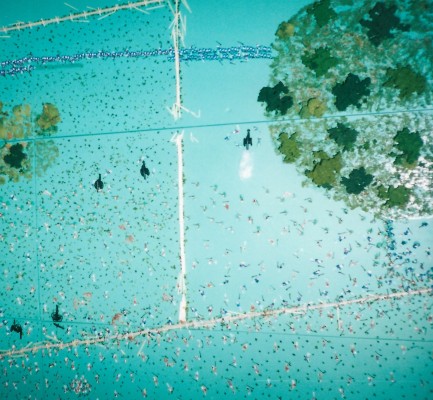 One thought on “25 Years: One Small Step for Dioramas, One Giant Leap for Civil War Cats”